The End of Negotiations?

Over the last decades, it has become a conceptual premise of most anthropological work that constructions of reality and ascriptions of meaning are socially negotiated – for example, during religious ceremonies, in refugee camps, or in scientific laboratories. However, what it actually means to “negotiate” something (in German: etwas aushandeln) is only rarely spelt out. Indeed, the origins of this notion in the history of scientific ideas typically remain just as implicit as an answer to the question of what characterizes this specific form of socio-cultural practice. Even if there appears to be agreement that “negotiating” implies the co-existence of heterogeneous views of the world, and that it also articulates the assumption that reality is ‘made’ interactively rather than merely discovered by people, such a conceptualisation risks rendering social negotiation a mere place holder for vague ideas about the social coproduction of reality.

Whereas the 1990s were still marked by a certain globalisation euphoria in which the removal of barriers in social processes of negotiation appeared to be achievable on a global scale, the social upheavals that have emerged in the meantime in relation to globalisation can no longer be ignored. The belief that worldwide exchanges could contribute to the emergence of a ‘global ecumene’ is gradually ceding to an awareness that existing or newly emerging forms of inequality, exclusion, isolationism and fortification contribute to new forms of social boundary-making. This also pertains to the question concerning with whom and under what conditions, in which ways and with which goals social actors negotiate with others – if at all. But processes of polarisation and ideological closure in the relations between different social groupings are also becoming more virulent within nation states. Taking recourse to different registers of social and cultural distinctions, disjointed and introverted spaces of social negotiation are emerging – such as in the fragmented publics of social media – that hardly take notice of each other, or that make any type of dialogue dependent on abiding by one’s own terms.

The conference aims to explore the potential and limitations of what is meant by the notion “to negotiate” by engaging empirically with the varied range of thematic and regional interests in anthropology. It thereby relies on the double semantics of the conference title by asking about, on the one hand, what is perceived as ‘non-negotiable’ by social actors in certain situations and contexts – whether for strategic reasons, based on ideological convictions, or out of life-preserving necessity. On the other hand, it also aims to explore those practices that bring the potentially unending dynamics of social negotiations to a closure – even if this is only provisional, and might later be revised and thus put into question. This includes, for example, provisional agreements as a platform for the possibility of future interactions, powerful acts of institutionalisation and legal closure, but also the radical withdrawal of a willingness to negotiate. This double-barrelled focus on the ‘End of Negotiations’ allows not only for new empirical insights but also for detailed epistemological, methodological and theoretical reflections about anthropological research more generally.

Against this backdrop, participants are invited to engage with the varied ways in which processes of social negotiation are brought to an end and/or with those aspects that are perceived to be ‘non-negotiable’ by certain groups of actors. Non-negotiability might be articulated, for example, with reference to religious orthodoxies (e.g., Christian, Hindu or Islamic fundamentalisms); political ideologies and ideal types of bureaucracy (e.g., nationalism; the separation of office and person); identity politics (e.g., indigeneity; cultural heritage; race; gender); minimum standards in terms of economic subsistence, human-environment relations (e.g., climate change) or human safety (e.g., the broad concept of ‘human security’); ethical judgements and moral legitimisations (e.g., in medical practices and volunteer work); dogmatically formulated concepts of the human (e.g., in human rights discourse and humanitarianism); economic policy guidelines (e.g., with a neoliberal orientation); standardised forms of communication (e.g., in the context of alternative conflict resolution); and the postulate of a radical alterity (as has been formulated and criticised in feminist studies and by scholars subscribing to the ‘ontological turn’).

When examining these topics ethnographically, what is of particular interest are the qualities ascribed to aspects that render them ‘non-negotiable’ for certain actors as well as the conditions for doing so – say, how their non-negotiability is contextualized and justified. Also, what is to be considered is how negotiability and non-negotiability are measured against each other as concrete social interactions play out, and how diverging references to non-negotiability are dealt with in conflict-ridden encounters. Further, opposing processes are also of interest – such as when the non-negotiability of an issue by one party is questioned or undermined by another one and thus made potentially revisable. Finally, the conference topic concerns the self-reflexivity of anthropological research. This is because, if we understand fieldwork as a process of negotiation between anthropologist(s) and ethnographic interlocutors, certain premises of these interactions are often perceived as non-negotiable, such as when it comes to research ethics or identity politics. In addition to analyses pertaining to specific ethnographic fields and subjects, conference panels and papers are thus also welcome that engage with the epistemological and methodological challenges of this topic, as well as those that concern the ethics and practice of ethnographic research. 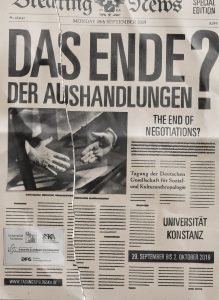